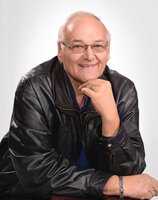 On Saturday, June 11, 2022 Erwin Thompson of Bonnyville, Alberta passed away with his loving wife Eileen by his side at the age of 73 years.

Memorial tributes are in memory of Erwin may be sent to the Bonnyville SPCA or Haying in the 30’s.

Erwin Thompson was a man that contributed to this community in so many ways!

In the past couple years, he had turned his attention to the big issue of unwanted cats being left in the MD.

These animals were left to fend for themselves and started to multiply.

The problem went from being a big issue to becoming a MASSIVE issue.

Erwin & his Wife, Eileen, did a lot of research into how to deal with the problem.

On their own DIME, and their own TIME, they tackled the problem.

They started catching spayed/neuter and release a vast number of cats.

Their research showed them this was the best way to deal with the problem of unwanted stray cats in the community.

Erwin not only reached out to the SPCA he also put his money where his mouth was and became the SPCA President. Thinking he could help more by being elected to the MD council he ran for a position.

Although he did not win a seat, his intent was honorable, and he did not loose site of his goal.

Erwin was a long-time member of Toastmasters International. He served on the Lakeland Toastmaster executive for many years. He was an exceptional speaker, motivator and FRIEND!

In honor of Erwin Thompson, we have decided to pledge money towards a project that was close to his heart, the Spayed / Neuter project.

We can not make Erwin's vision come true without help from others in the community. Therefore, we are placing a challenge to others to find it in your hearts to help us keep one of Erwin's dreams alive.

creatures in the Lakeland but also the four-legged ones as well.

Erwin, sit back and watch us continue the work you started. Your job here is not done, we will keep it going in your name!